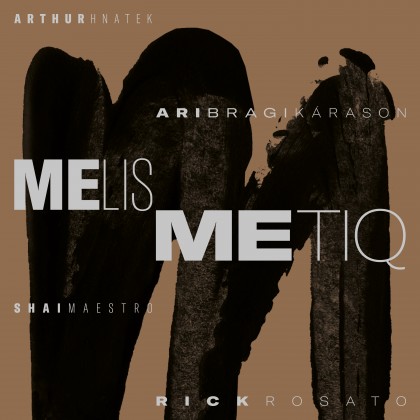 “Melisma: word describing the art of singing an ornamentation on one syllable”

Co-founded by swiss drummer and composer, Arthur Hnatek, and icelandic trumpeter, Melismetiq releases their first self-titled album since its creation in 2010 in New York.

Melismetiq is a polymorph jazz project centered around their original collaborations with other artists transgressing any musical boundaries. For this record, they decided to invite Shai Maestro, israeli piano star, and Rick Rosato, canadian bass player.
Their vision was to form a quartet where jazz improvisation and lyrical uplifting compositions mesh themselves into a beautiful, lush and soothing musical experience. Their songs, initially seemingly simple, resemble singable forms where each of their four voices navigate freely and precisely, fugue-like, reuniting frequently on peaceful cadenzas. As a result, those still frames let the listener sink deeper, leaving the music crystallizing ever so more fragile. Their beautiful rendition of Bjork's Unison is another example of the ode to the cyclical musical tradition, they pay tribute to.

Their recording was co-produced by the RSI Rete Due in Lugano, where they recorded in the prestigious radio hall.

Melismetiq; a heart-felt celebration to stillness.