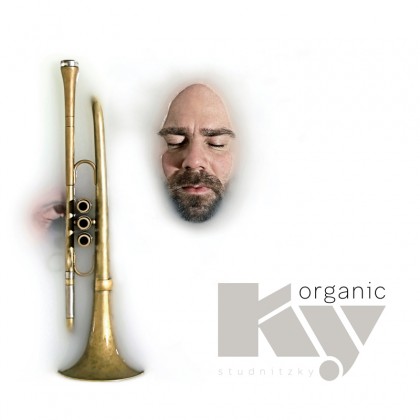 KY is the name of Studnitzky’s multifaceted music project which is minimalistic yet full of layers and diverse sounds. In a stylistic departure from his orchestral project MEMENTO which earned him an ECHO Jazz Award, KY organic takes its aesthetic influences from electronic music and is performed by a scaled-down instrumental ensemble. What makes this album even more remarkable is that the elements were all recorded acoustically.

Studnitzky has succeeded in combining virtuoso yet unassuming piano playing with his unique vocal-sounding trumpet style to create light and compelling grooves, delivering strikingly emotional melodies with beautiful clarity. His open approach and eclectic background have enabled him to magically fuse a minimal techno feel with sophisticated voice leading, inspired jazz improvisations and indie pop harmonies. The result is rhythmic, aloof and romantic all at once.

Looking at Studnitzky’s creative output over the last few years, KY organic is clearly pursuing an artistic quest. It is the search for the perfect alchemy between different musical genres and mutual enrichment. Studnitzky has created his own distinct style with KY organic, successfully finding a balance between being contemporary yet indefinably timeless.

The title track ORGANIC masterfully mixes a church organ with prepared piano so that it is reminiscent of an analogue synthesizer. In LUBA the second drum set sounds as if it has been run through a filtered delay while the piano floats above an epic middle section. WATERGATE pays homage to the renowned techno club in Berlin. Rather than taking its lead from the current zeitgeist, the prepared piano that makes RAIMUNDO sound so electronic has been appearing in Studnitzky’s recordings since his 2010 album EGIS. SIEBEN is a cleverly constructed club track featuring melancholic piano lines which add emotional depth. C’MON MOVE is another fascinating club track with thickly layered grooves, unapologetically simple harmonic fragments and virtuoso solo flights that never loose their pace. ANEMOS highlights the band’s open attitude to jazz and Studnitzky’s talent for catchy hook lines. The solo section of MILAD sways between improvised trumpet lines and a continuously shifting harmonic landscape. AVISO is the piano ballad which rounds off the album on a contemplative and romantic note.

Studnitzky produced KY organic together with his long-term musical collaborator Paul Kleber at the RecPublica recording studio, located deep in the Polish countryside. The studio’s remote location and seclusion were crucial for the production, providing a complete break from Studnitzky’s international concert tours and the continuous buzz of his home in Berlin.

Studnitzky is a professor at the Dresden University of Music where he teaches his contemporary and open approach to jazz music. It was at the university that he first met drummer Tim Sarhan and guitarist Laurenz Karsten. Influenced by minimal techno, their style of playing contributed to the electronic sound of KY organic.